Freezing weather threatens the integrity of gas pipelines every year. While this once seemed like a problem reserved for northern areas, severe weather events like the historic cold snap that gripped the central and southern U.S. for more than a week in February show that even pipes in subtropical climates aren’t protected from freezing weather and its effects.

Monitoring and mitigation activities can reduce the likelihood of gas pipeline damages caused by freezing weather. But, determining the correct activities—for example, visually inspecting a section of pipeline versus replacing it entirely—will likely depend on the probability of freezing weather affecting your assets in the first place.

To assist in your pipeline damage prevention efforts, check out this information on why freezing weather causes gas pipelines to leak or break, as well as the areas that are most likely to experience freezing weather.

Water expands by about 9 percent when it freezes. When water freezes underground, it causes a condition called frost heave, which is an upward swelling of soil. Frost heaves can damage roads, building foundations, railroad tracks, and, yes, gas pipeline systems.

According to Pipeline Hazardous Material Safety Administration (PHMSA) data, frost heave has caused 82 percent of all cold weather damage incidents from 1984 through mid-2014. The second-leading cause of incidents is snow accumulation or movement, which accounted for 11 percent of damages.

You might assume that the colder the overall temperature, the more likely frost heave or snow accumulation will occur and damages to happen. But, according to the Gas Technology Institute (GTI) report “Assessment of Frost Impact on Cast Iron Pipes,” average daily temperature is not the best weather indicator of damage from frozen pipes.

GTI researchers investigated leak-database records of four eastern Massachusetts counties during the winter months from 2001 to 2012 and found a correlation between “Freeze-Days”—the number of days per month with a high daily temperature below 32 degrees Fahrenheit—and pipeline damage. Their research showed that the vast majority of gas pipeline system damages (90 percent) occurred after a minimum of five freeze days.

What this means is that one or two cold days aren’t likely to result in pipeline damage, but leaks and breaks are likely after a week-long period of sustained freezing.

Where sustained freezing occurs most frequently

The recent freezing weather that brought Texas to a standstill shows that critical infrastructure assets throughout North America are vulnerable to severe weather events. In Oklahoma City, for example, temperatures were below 20 degrees Fahrenheit for 210 hours—nearly nine days—according to the Washington Post.

Read: Is Your State Next? Texas Exposes Nationwide Infrastructure Risk

At this time, gas pipeline systems most at risk for damage from freezing weather are primarily in the Northern Midwest. Thirty-four cities across seven states (Iowa, Michigan, Minnesota, Montana, North Dakota, South Dakota, Wisconsin) experienced 10 or more periods of sustained freezing over the last five years. The below chart shows each city’s average number of sustained freezes per year, as well as the average number of total freeze days per year. 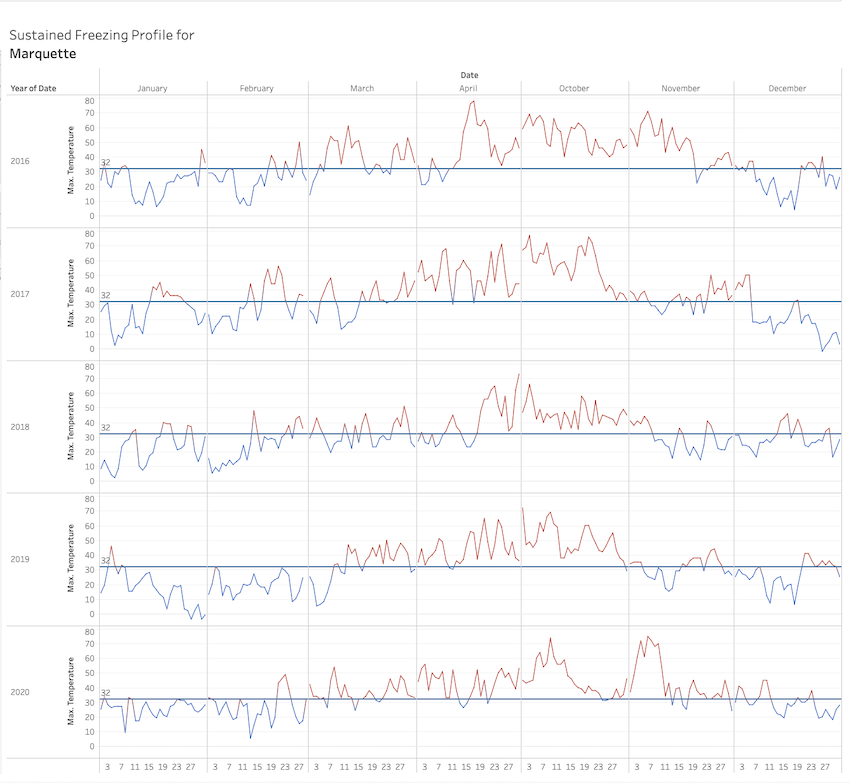 Grand Forks, ND, ties with a number of cities for the second-highest average number of periods of sustained freezing over the last five years. But, it holds the record for the longest period of sustained freezing. In 2019, the city’s high temperature was below 32 degrees Fahrenheit for 62 days! See the below chart.

Minneapolis had an average of 61 days below freezing and an average of three periods of sustained freezing per year. The U.S. Census estimates Minneapolis had a population of nearly 430,000 as of July 1, 2019, making it the most populous of the 34 cities that regularly experience sustained freezing. This means leaks and breaks in the city’s underground gas pipelines have the highest risk of severe consequences. In the case of freezing weather, this could include residents dying. 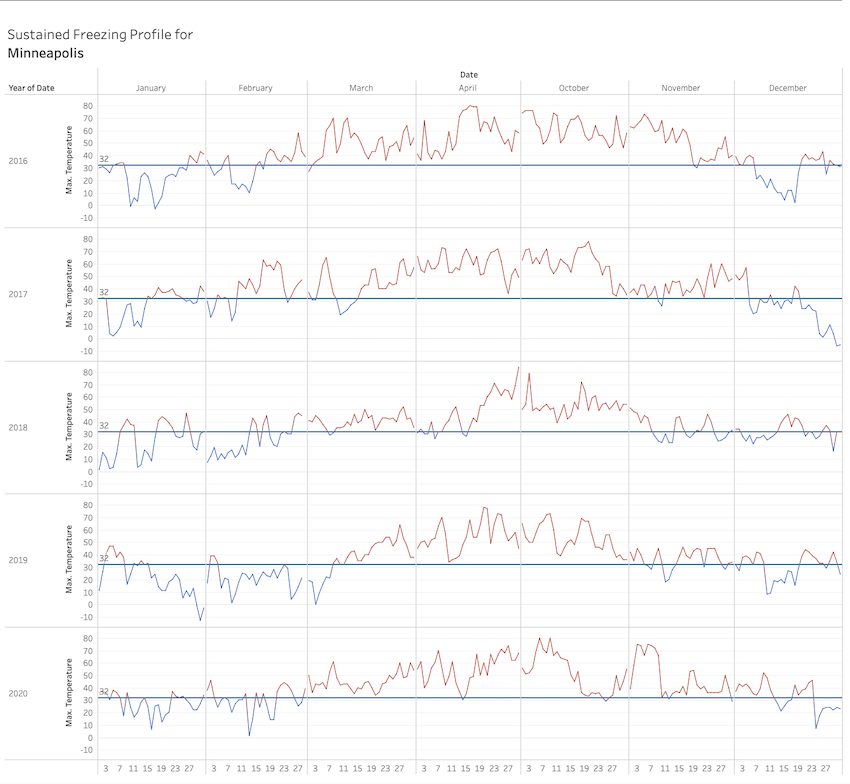 Other factors that contribute to pipe damage in freezing weather

It would be misguided to assume all underground gas pipelines are equally susceptible to damage from freezing weather. According to PHMSA, soil type and pipeline depth, materials, age, and size all contribute to a pipeline’s overall vulnerability.

Gas infrastructure asset owners and operators, particularly those in areas that experience periods of sustained freezing, should reference their records to identify underground gas pipelines with the highest vulnerability to determine the appropriate infrastructure damage prevention activities. Owners and operators outside of areas that regularly experience sustained freezing should do the same. As we saw in Texas, a single severe weather event can be devastating to the energy grid.

From wildfires in the West to hurricanes in the East and tornados in between, severe weather events are growing more extreme and happening more frequently. Although underground gas pipelines in the Northern Midwest have been the most affected by sustained freezing over the last five years, cold weather can and will infiltrate historically warmer climates.

Consumers depend on their utilities to survive and thrive, so it is imperative that gas infrastructure asset owners and operators throughout the U.S. take action now to ensure reliability in the future. Waiting for temperatures to plunge could be too late.

Methodology: Team Urbint analyzed high daily temperature information for 210 U.S. cities for the last five years (2016-2020) from the dataset “Compiled historical daily temperature and precipitation data for selected 210 U.S. cities.” (Lai, Yuchuan and David Dzombak, Carnegie Mellon University, 2019.) Check out our Tableau Dashboard for weather data on all of the cities we examined. 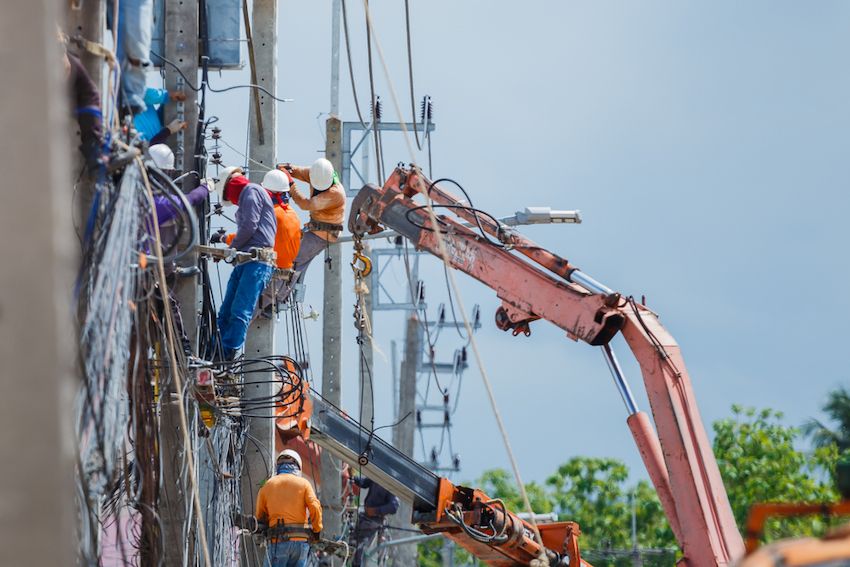 Safety management
7 Ways to be More Proactive About Worker Safety 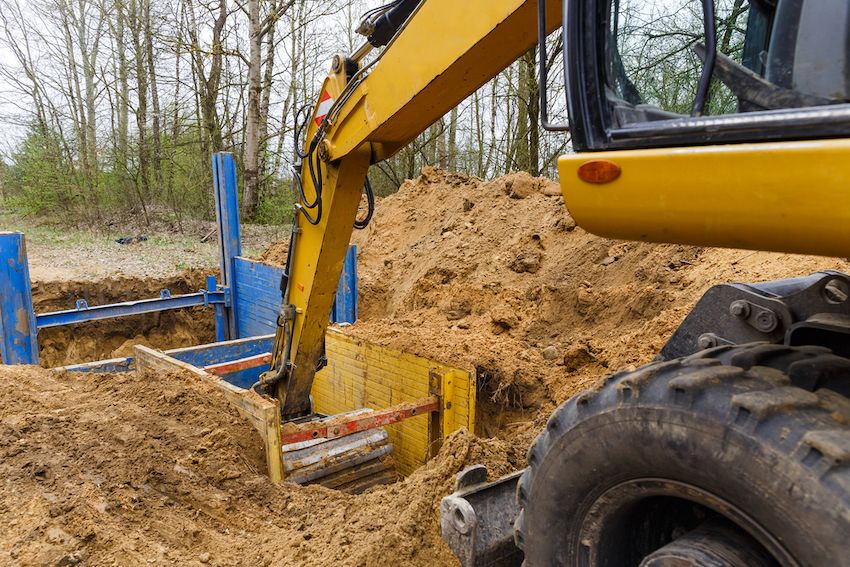 Safety management
How to Protect Workers From 4 Excavation Safety Hazards